State machines are found everywhere, whether they are fleshed out initially as such is a different matter.

In an application it's common to see different states being represented as an enum, and the transitions replace the current state with the next based upon some logic.

Using a bool flag. Nothing wrong here right? But this doesn't help us express our state in the domain very well. What happens when the record needs to represent different data depending upon it's state? For example:

There is another way to do this. The F# type system is advanced enough to allow us to represent these states directly - as discriminated unions.

Much better, now an unverified email doesn't have to concern itself with a VerifiedDate or any other fields that might be there.

So this is a very simple example, we only have 2 states; Unverified and Verified. An email address must be in 1 of either of the 2 states. It's either verified, or it is not.

Now we have the states fleshed out, we need to define transitions (or events) which have the responsibility of governing the states, in other words; from state A to state B. So using the email example, we really only have one transition, and that's an UnverifiedEmail becoming a VerifiedEmail.

You can see how the verified transition handles a VerifiedEmail by just returning it.

We also need a way to create an email address, but that's easy, a new email always begins it's life as unverified.

Before continuing, let's take a closer look at that verify function.

You might be wondering why our verify function doesn't just take an Unverified email directly and have done with the match?

We could do this, but how would we handle the other state?
Each transition must take and return the whole state machine. Each state needs to be handled somewhere, it's best handled by the transition function rather than the caller, it's much easier to encapsulate and while also being explicit about the logic of our system. F# will also help you out on this as the compiler will warn you whenever you don't match against every possible case, win.

Lets use the same principals and apply it to another real world problem. Payments.

We will need to support multiple payment types. So I'll just go ahead and put a few in for this; VISA, PayPal and a CashCard.

So forgetting whether this is a withdrawal transaction or not, what data do we need to make a successful payment? We should put all that into a record to contain it. All of which are very obvious:

I'm sure there will be more but for the sake of keeping things simple i'll stick with these 3.

This is probably the most important part, expressing all of the different states a transaction can be in throughout the process. I've come up with 4 obvious ones which are:

Let's write this out:

The transitions involved are simple, the payment process follows a very linear path without any deviation really. The transaction can be in only one state at any given time (which is the whole point) and all cases are handled explicitly. It's certainly helpful to look at the system more abstractly using a diagram or table. 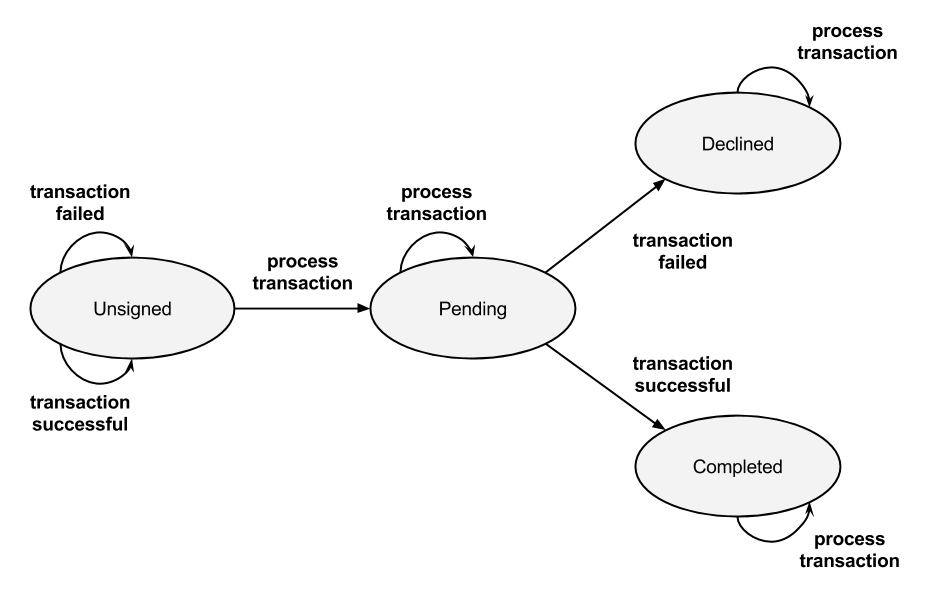 Now to write out the transitions.

In most cases, you would probably want to handle the side cases in other ways than just returning the transaction which was passed to the function.
Especially with the Declined state, the system might allow a Declined transaction to be reprocessed - which I haven't catered for here, but would be a simple change to make.

So that's the machine done. All that's left to do is to use it. We still need a way to actually send a payment/transaction to be processed.

This is a good opportunity to use F#'s MailboxProcessor to create an agent or actor. The agent will receive transaction messages as they are sent to it and handle them however we see fit.

The main reason i'm using an actor here is they are very easy to scale and allow us to build in supervision. In a real project, I would recommend Akka.NET for such tasks.

Enter your email
Subscribe
I find it very useful to jot down what I value most and what I'm looking for in a role each year. This is the first time I have published it of course. I find it grounds me. It is all too easy to get swept away with the work
This is essentially a list - A thought process to which I personally find useful when faced with pulling out chunks of a larger codebase. I like to think the approach is fairly practical and 'real world'. I'm primarily targeting those difficult areas, you know, the parts of the domain

In keeping with my previous pos [https://www.marccostello.com/async-await-pitfall-1-blocking-async-calls/]t in this series, this one is about context synchronisation in .net web applications. There is no SynchronisationContext in .net core (.net 5+). Keep that in mind. [https://blog.stephencleary.com/2017/03/aspnetcore-synchronization-context.html] When you await a